AUS vs IND 4th ODI: For a majority of India's chase, it seemed as if the visitors would cruise to an easy victory, chasing a massive target of 349.

For a majority of India's chase, it seemed as if the visitors would cruise to an easy victory, chasing a massive target of 349. They were comfortably placed at 277 for 1 in the 38th over. It was at that point that the first centurion of the Indian innings, Shikhar Dhawan, fell. From that point, it was all Australia as Kane Richardson finished with a five-wicket haul, running through the middle and lower order. His wickets included that of the other centurion, Virat Kohli. In the end, India failed to get anywhere close to the target, as a rampant Australia went 4-0 up in the series. 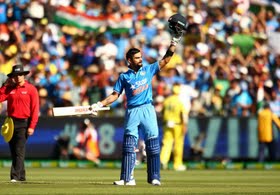 The collapse began when Dhawan fell in the 38th over, unable to keep a slower ball from John Hastings down, and gave a catch to backward point having made a splendid 126. At 277 for 2 though, it was India's match to lose, and they did. With Ajinkya Rahane injured, India were forced to alter the batting order. In walked skipper MS Dhoni, only to be walking back a couple of balls later. He came down the pitch, but played a nothing waft and gave a simple catch behind the wickets. The scoreboard hadn't moved, and the momentum had swung Australia's way. With Kohli at the crease though India would have felt comfortable.

The massive game-turning moment came when Richardson claimed Kohli first ball of the 40th over. The centurion came down the track and chipped one straight to mid-off, checking his stroke at the last minute, mindful of the task at hand. Rahane, struggling with a hand injury, came out to bat amidst the collapse, but could not stitch the damage. On 2, he guided Richardson into the hands of Steve Smith at slip. The rest of the batting was too inexperienced to handle this pressure. Gurkeerat Singh and Rishi Dhawan found out how tough international cricket is. Ravindra Jadeja was stranded as Australia surged to a 25-run triumph.

The end to the Indian innings was in stark contrast to the way they began. Rohit Sharma went on an all-out attack slamming his way to 41 from 25 before gloving Richardson down the leg side. Dhawan and Kohli build on the bright start after fell Rohit, and took on everyone from Richardson to Mitchell Marsh, and James Faulkner to Nathan Lyon. Dhawan hit 14 fours and two sixes in his 126 while Kohli smashed 11 fours and a six in his 106. The partnership added 212 for the second wicket at a brisk pace. When they were at the crease, an Indian win seemed a formality. Following their dismissals, an Indian defeat became a certainty.

Earlier in the day, Australia showed India how to set a big target batting first. David Warner and Aaron Finch added 187 for the opening wicket against a hapless batting attack. Both scored at a run-a-ball, with Warner just missing out on a hundred, and Finch getting there. The latter also claimed a scalp of sorts, by hitting Richard Kettleborough on the chin. The umpire had to return retired hurt. After Warner and Finch's big knocks, Smith and Glenn Maxwell came up with blazing innings themselves. Australia finished on 348 for 8. For much of India's chase, it seemed inadequate. But, thanks to Richardson and the panicky Indians, it was more than enough in the end.