Our boys showed a lot of character and determination after the Adelaide Test: Ajinkya Rahane

Team India created history on Tuesday when they defeated Australia in Brisbane, chasing down a record 328. Shubman Gill (91), Rishabh Pant (89 not out) and Cheteshwar Pujara (56) were the major contributors as the Aussies were stunned at their fortress, losing their first Test match at the Gabba since 1988. Following the massive triumph, Indian captain Ajinkya Rahane was left almost speechless as India retained the Border-Gavaskar Trophy with a 2-1 triumph.

Rahane admitted the win means a lot to them. "I don't know how to describe this, but our boys showed a lot of character and determination after the Adelaide Test," Rahane, whose hundred at Melbourne was a defining moment in the series, said.

"I'm really proud of each individual. The conversation between Pujara and me was that he would bat normal, and I would take it on," Rahane, who made a quickfire 24 before being dismissed, added.

Rahane was full of praises for Chetshwar Pujara, Shubman Gill, Rishabh Pant and Washington Sundar. “Credit to Pujara, the way he handled the pressure was magnificent. Rishabh and Washington were very good at the end," he further said. 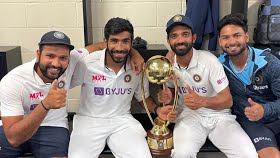 According to the Indian captain, the decision to go in with five bowlers was taken keeping in mind that 20 wickets are needed to win a Test. "Taking 20 wickets was the key, so we opted for five bowlers. Sundar brought the balance in place of (Ravindra) Jadeja. The intention was clear to play five bowlers,” the Mumbaikar explained.

"(Mohammed) Siraj played two Tests, (Navdeep) Saini just one, so it was inexperienced but the character shown by the bowlers and everyone else was incredible," he further added.

Speaking at the post-match presser, Rahane said that he looked good as captain because everyone contributed to the team’s cause. "It's an honour to lead the country. It was not about me but about the team. I looked good because everyone contributed. For us it was about having that character on the field, having the fighting spirit, the attitude," Rahane said about his captaincy stint.

Admitting that things were tough after the Adelaide Test, he added that it was all about about showing character and fighting spirit. “We were not thinking too much about the result. We just wanted to play good cricket. Credit to everyone in the squad including the support staff," the Indian captain further said.