Why MS Dhoni is no Adam Gilchrist

In recent years, Indian skipper MS Dhoni has often been compared to former Aussie wicket-keeper and dashing batsman Adam Gilchrist. The reason is understandable for both have similar attacking styles of play. But, while Dhoni has outdone Gilchrist in terms of ODI success, he’s yet to make a mark anywhere close to the Aussie in the five-day format of the game. The true capability of a batsman comes to the fore when he performs away from home. And, this is where Gilchrist was so successful, and Dhoni has been a failure for most part of his career. 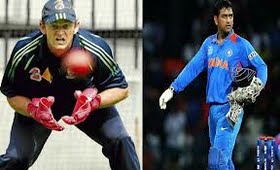 The current tour of South Africa is another illustration of how ineffective Dhoni is as a batsman when he plays away from home. His poor footwork and technique has continued to hamper him. Dhoni’s dismissal in the first innings at Durban was another in the long list of dismissals where he edged a ball outside the off stump and handed a simple catch to slip. Dhoni’s wicket came at a time when India needed to steady the ship after the loss of quick wickets, and his dismissal only hastened India’s unbelievable batting collapse, which put South Africa on top.

In the three innings so far, Dhoni has only managed scores of 19, 29 and 24. A lot is expected of the team’s skipper, especially when he is also the side’s most experienced batsman. As mentioned earlier, the modes of Dhoni’s dismissals are also worrying. Ever more concerning is the fact that this is not the first time that the Indian captain has struggled away from home. In fact, if you take a closer look at his record against top countries like England, Australia and South Africa in their own backyard, you will realise that Dhoni still has so much to prove as a batsman.

Contrast this with Gilchrist, and you find that he averages 65.3 in South Africa from six Tests with two hundreds, 40 in England from 10 Tests with one hundred, 40 again in Sri Lanka after 3 Tests and 81 in New Zealand after six Tests. The one standout aspect of Gilchrist’s performance is that he has got Test centuries in each of the above- mentioned countries. Even in India, where his average falls to 28.5 from seven Tests, Gilchrist has scored two Test tons, both match-winning ones. In fact, 10 of Gilchrist’s 17 centuries have come away from home.

Coming back to Dhoni, he is an accomplished one-day player, but to be rated as a Test player, he needs to raise his level away from home.