Experienced Indian batsman Rohit Sharma is pleased at being appointed the vice-captain for the five ODIs and only T20I against Sri Lanka. Rohit has got the honour after representing India for 10 years.

“Whenever the opportunity comes, in the first one-day international on August 20, there will be some sort of role I have to play. I’m looking forward to it. Rather than thinking too much about it, I just want to enjoy the moment,” Rohit was quoted as saying in an Indian Express report, at a press conference in Pallekele. 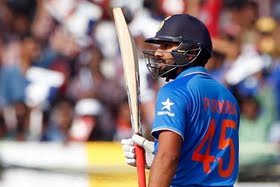 Rohit, who has led Mumbai Indians to three IPL titles added, “IPL is a completely different ball game and international cricket is completely different. But yes, the excitement and energy remain the same, so nothing changes too much. In the IPL, I was captain, so I was more in front; here, I have to play a little behind-the-scenes role, but yes, I’ll be very excited to step on to the field as vice-captain of the Indian team.”

Rohit continues to battle for his place in the Test team. First, he battled injury and poor form. And, in Sri Lanka, Hardik Pandya was preferred over him.

“Nobody likes to sit out, but it all depends on the team dynamics, and what the captain and coach want, and you got to accept the fact and move forward. I kept working on my skills and tried to see where I can improve as a cricketer,” he added.